It’s No Coincidence that Power Plants Are in Poor Neighborhoods

A climate rally in Hartford on Sept. 18 blasted the usual practice of putting power plants and waste processing facilities in minority and poor areas, calling it environmental racism. Speakers, almost all of whom were people of color, spoke from the park’s bandshell, in front of signs that read “Fossil fuels make us sick,” and “End environmental racism.”

They called on Gov. Ned Lamont, who talks “green” but makes no objection to pipelines and fossil fuel power plants, to change his tune.  In particular, speakers mentioned Killingly in the poorer eastern part of the state that will be saddled with another methane-burning power plant if industry and Lamont have their way. It will also pump out massive amounts of global warming gases. About 100 watched from grassy areas not in the surprisingly blistering September sun.

A number of groups had tables or booths at the rally. Promoting Enduring Peace had a booth draped with banners about our bold ideas on climate. Rather than appeal to the fossil fuel companies like Exxon and Shell to go “green,” PEP called for the popular takeover of the whole fossil fuel industry and its gradual abolition. We called for carbon capture by preserving mature trees (like the ones in Remington Woods in Bridgeport) and re-wilding land. We also asked for rationing the use of burned fuels (not only fossil fuels, but so-called “bioenergy”) as long as it’s absolutely necessary to use them.

Earlier in September, a Connecticut Department of Energy and Environmental Protection report revealed that Connecticut is not even on track to meet targets set by the CT Legislature for reducing its greenhouse gas emissions. The latest figures were from 2018 and showed that emissions actually rose from 2017 to 2018. The elite may think environmental racism keeps them safe, but we are losing the battle for a livable climate and that will be disastrous for all.

To see the video of the rally go to PEPeace.org.

University of California Says It Has Divested Completely from Fossil Fuels

The University of California announced Tuesday it has completely divested its $126 billion portfolio from all fossil fuel companies. The move makes UC the largest university system in the United States to meet a core demand of activists fighting the climate crisis. 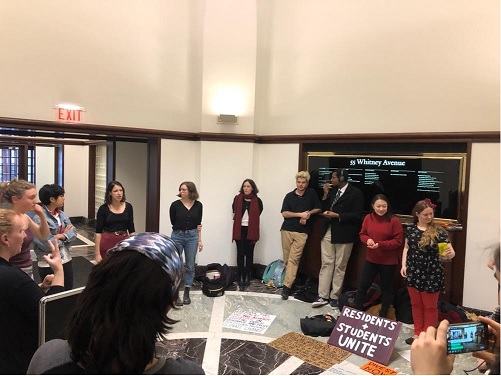 NEW HAVEN, CT – Student demonstrators interrupted a public talk given by Yale Chief Investments Officer David Swensen and NPR correspondent Chris Arnold on Tuesday, calling on Swensen to meet the demands of students who were occupying the Yale Investments Office for the third time in the past five months. For more information visit https://www.facebook.com/FossilFreeYale.

Half an hour into the financial advice presentation described as “teaching students to invest like Yale does”,” more than 40 members of the Yale Endowment Justice coalition stood up, holding banners reading “Yale is Complicit” and “Inaction is not an option.”Lorna Chitty YC’20, a member of the Yale Democratic Socialists, interrupted Swensen to inform him that earlier that afternoon, 20 students and community members had begun a third sit-in in the Investments Office. She asked when Swensen would respond to the years of student activism calling for fossil fuel divestment and cancelling Puerto Rico’s debt.

As Swensen sat without replying, Arnold urged the protestors to bring their complaints at another time.. Chitty responded: “We have gone through all of your administrative channels, we have written countless reports, we have delivered our demands to your door, and you remain invested in the climate crisis that threatens all our futures and is already impacting the people of Puerto Rico.” The student organizers marched out of the lecture hall, chanting “Cancel the Debt,” leaving only about half of the original attendees. .

This isn’t the first confrontation between Swensen and student organizers. In March 2018, Yale’s legendary investments manager faced backlash following an email exchange with the Yale Daily News, in which Swensen called the editor-in-chief a “coward” and wrote, “Don’t you understand simple English?”

Students point to Yale’s holdings in the Puerto Rican debt crisis as an example of investments that aren’t consistent with Yale’s stated commitment to climate change. “As Puerto Rico struggles to recover from a climate change-fueled hurricane and a massive debt crisis, Yale’s fifth largest fund manager Baupost is suing the island to be repaid first. Our demands for bold moral action from Yale have been met with silence. That’s why we’re continuing to take direct action to hold our university accountable to principles of climate justice” said Adriana Colón-Adorno YC’20, a member of Despierta Boricua, the Yale Puerto Rican students association. Yale’s CIO David Swensen sits on the board of Baupost.

Fossil Free Yale has been working with the Yale administration for six years to divest the university’s $29 billion endowment from fossil fuels, but students’ frustration with administrative stalling and inaction has led them to take more drastic actions like disrupting an event. “Nonviolent direct action is a necessary and just response to a rigged and fraudulent democratic system of representation,” says Ross Pennock, DIV ’21, a member of the Endowment Justice Coalition.

While the students were walking out of the lecture hall, the Yale Police Department was issuing citations to 20 more students and community members for refusing to leave the Investments Office until Yale agreed to meet their demands. This sit-in follows a December action at which 48 students were arrested, the largest university fossil fuel divestment direct action in history, as well as a March sit-in at which 17 students were arrested. The activists promised they would continue to hold Yale accountable to principles of climate justice.

Yale University police arrested and issued citations to 17 Yale students who held an occupation of the Investments Office [March 4] demanding that Yale direct its fund managers to cancel their holdings in Puerto Rico’s debt and divest the endowment from fossil fuel companies. A total of 30 students and New Haven community members participated in the sit-in lasting the entire afternoon. They have emphasized that they will continue returning to the Investments Office until the University takes action on their demands.

In the face of hurricanes, devastating California wildfires and the latest UN climate report, bold and comprehensive action is needed to address climate change. Climate change exacerbates existing economic inequity, as seen in Puerto Rico, where several “vulture funds” that hold Puerto Rico’s considerable debt are demanding to be repaid before the island can rebuild and support its poorest residents. Research has shown that the intensity of hurricanes like Maria, which struck the island in September last year, is being exacerbated by climate change.

“As Puerto Rico struggles to recover from a climate change-fueled hurricane and a massive debt crisis, Yale’s fifth largest fund manager Baupost is suing the island to be repaid first. Our demands for bold moral action from Yale have been met with silence. That’s why we’re continuing to take direct action to hold our university accountable to principles of climate justice,” said Adriana Colón, a member of Des-pierta Boricua, the Yale Puerto Rican students association. Yale’s CIO David Swensen sits on the board of Baupost.

For six years, student and community organizers have worked with the Yale administration to advocate for the divestment of Yale’s $29.4 billion endowment from fossil fuel corporations. Yale would join 998 institutions that have committed to divesting $7.2 trillion from the fossil fuel industry worldwide. Most recently, Middlebury College announced it will divest its $1 billion endowment from fossil fuel companies. For more information, please contact Martin Man at martinmi5@hotmail.com or call (845) 505-9281.

On the last day of Yale’s 2018 Fall semester [Dec. 7], 48 students, professors, and New Haven community members were arrested after a 5-hour occupation of the Yale Investments Office.

We were sitting in to demand that Yale direct its fund managers to cancel their holdings in Puerto Rico’s debt and divest from the fossil fuel industry. After 6 years of trying to engage with the Yale administration, the few channels available had failed us, and our only alternative was direct action.

As Puerto Rico struggles to recover from a climate change-fueled hurricane and a massive debt crisis, Yale’s fifth largest fund manager Baupost is suing to have its debt repaid before the island can rebuild, and renowned Yale Chief Investment Officer David Swensen sits on the board of Baupost. Our university’s investments in injustice don’t surprise us. We also know that Yale invests at least $678 million in fossil fuel companies, including ExxonMobil and Antero. These corporations intend to extract and burn as much coal, oil, and natural gas as possible, regardless of the consequences to islands like Puerto Rico. And they’ve spent billions funding climate denial and paying off politicians to lobby against climate policies like a Green New Deal.

In the Investments Office lobby, members of our coalition presented on Puerto Rico’s debt and the roots of Yale’s endowment in slavery, held trainings, sang songs, and read statements of support from around the world. Meanwhile, 450 students marched to the Investments Office and rallied in support, as those inside were arrested. The Yale administration—who had recently published a statement blaming climate change on everyday consumers rather than fossil fuel corporations—chose to arrest its students rather than have a conversation with us. A few days later, at the Advisory Committee on Investor Responsibility’s public meeting, we again confronted the administration’s failure to act in the face of climate injustice. Our calls for moral leadership from Yale have been met with stalling, inaction, and a willful naiveté that amounts to gross negligence. But students, New Haven, and Puerto Rico are powerful, and we will hold this university accountable.

Email fossilfreeyale@gmail.com to get involved.