Semi Semi-Dikoko was born in Congo, worked in many countries and moved to New Haven in 1991. Our condolences to his family and to his large community of friends. He was an artist, a computer analyst with IBM, played flute and trombone, lived in Brussels, Belgium, and Bremen, Germany. In addition to English, he spoke German, French, Japanese, Bantu, and Swahili. He was president of the Friends of Edgewood Park, and he had a pilot’s license. He was friendly, warm and engaging, and had a wide and deep presence in New Haven, especially in Westville.

The following excerpts are from the article Lucy Gellman wrote for the Sept. 14, 2022 Arts Paper. You can read it in its entirety at www.newhavenarts.org/arts-paper/articles/the-mayor-of-westville-new-haven-mourns-remembers-semi-semi-dikoko.

Semi Semi-Dikoko, a tireless advocate for the arts who blessed New Haven with three decades of a gentle and gen-erous spirit, died at Smilow Cancer Hospital. The cause was prostate cancer, which Semi-Dikoko had been fighting bravely and often quietly for four years. In the past decade, he also battled lymphoma, which was until recently in remission. He was 69 years old. 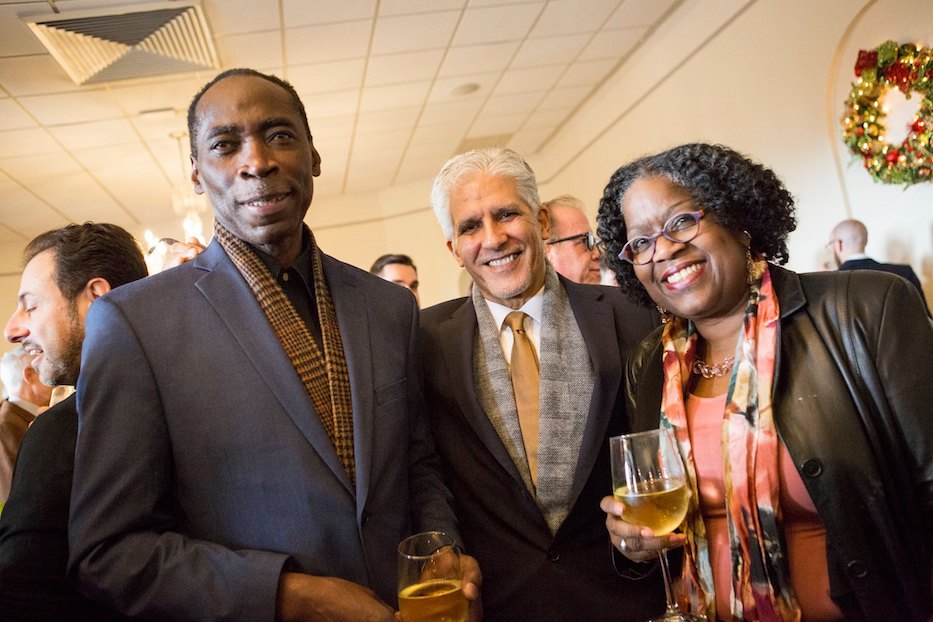 Semi Semi-Dikoko with David Sepulveda and Aleta Staton at the Arts Awards in December 2012. Photo: Judy Sirota Rosenthal. Photo used with permission from the photographer.

“Semi just touched so many lives,” said his friend and studio mate David Sepulveda. The two, who shared a studio at West River Arts, were so close they often seemed like two halves of the same, vibrantly beating heart.

He was trained as a systems architect and consultant, who worked for IBM, Fujitsu Americas, Deutsche Bank, NASA, and Southern New England Telecommunications (SNET) among others. He was a dedicated public servant, whose thousands of volunteer hours spanned Friends of Edgewood Park to Artspace New Haven to the Westville Village Renaissance Alliance. For most of his friends, he was Semi, a warm and constant presence who always had time for the people in his life.

“His art was human connectivity,” said Aaron Goode, who met him over a decade ago when the two enrolled in the city’s first Democracy School class. “That was his medium. He was a painter of civic canvases. Westville, that was one of his canvases, but so was New Haven and so was New York.”