You are invited to participate in this year’s annual New Haven commemoration of the atomic bombing of Hiroshima and Nagasaki: 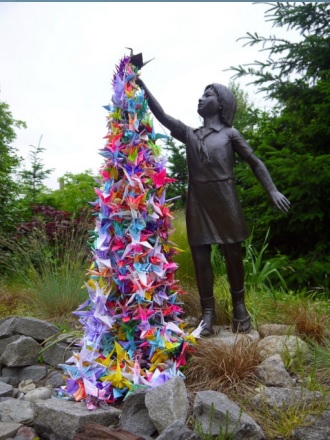 Sadako Sasaki (Sasaki Sadako, January 7, 1943 – October 25, 1955) was a Japanese girl who became a victim of the atomic bombings of Hiroshima and Nagasaki by the United States. She was two years of age when the bombs were dropped and was severely irradiated. She survived for another ten years, becoming one of the most widely known hibakusha—a Japanese term meaning “bomb-affected person”. She is remembered through the story of the more than one thousand origami cranes she folded before her death. She died at the age of 12 in October 1955. (https://en.wikipedia.org/wiki/Sadako_Sasaki)

A terrible, grave danger today comes with the bloody war in Ukraine with the two nuclear-weapons superpowers, Russia and the USA, on opposite sides of the conflict, which could escalate into the use of nuclear weapons. The US government and the US media are ignoring the real potential that the longer this conflict continues, the greater the possibility that such weapons will be used.

Let us warn our elected officials in Washington to take actions to stop this war, insist on urgent, honest negotiations for peace.