Al Marder listened from the corner of the screen, his head bobbing as Millie Grenough lifted her hands and began to conduct the impromptu New Haven Peace Commission choir. A cacophonous chorus of “happy birthday” rang out over the screen, voices lifted to give a centenarian his due. 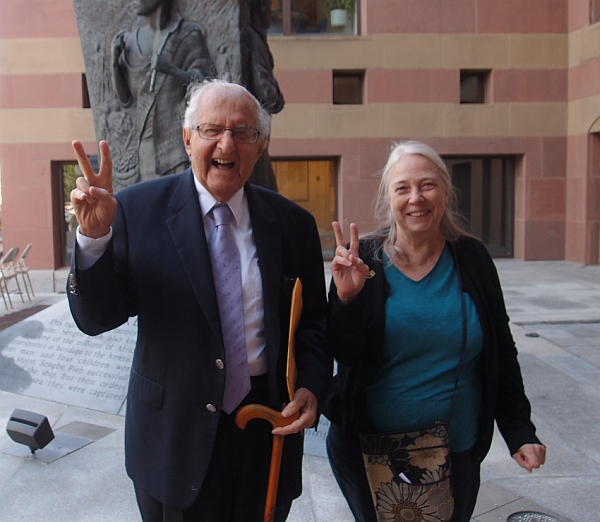 Marder—a lifelong champion of worker rights, disarmament, anti-racism and literally keeping the peace in New Haven—turned 100 Tuesday evening with a clear call to do good in the face of climate disaster, economic depravity, global precarity and violence that has gripped both New Haven and the country. Speaking at a meeting of the New Haven Peace Commission, of which he is a founding and current member, he showed no sign of stopping as he entered his second century of life.

“I’m grateful for the opportunity to spend the evening with you,” he said as commissioners kicked off the night with birthday wishes and a musical interlude. “The struggle for peace is not easy. We’re living in a society that’s built on guns and killing and we’re trying, you and I, to educate young people that there’s another way of living. A peaceful way, a just way, to treat each other as individuals without hatred, without killing.”

Marder has made peace—particularly labor rights, demilitarization, and a fervid commitment to anti-racism—his life’s work. Born in 1922 to Ukrainian immigrants in the city’s Hill neighborhood, Marder started growing his roots as an organizer before his 10th birthday. Some of his earliest memories are of an economically hard-hit New Haven as the city headed into the Great Depression. In an interview with Mary Donahue of Connecticut Explored in 2016, he recalled watching unemployed men come from the rail yard to his parents’ Oak Street grocery store, looking for something to eat.

Even at a very young age, Marder became committed to fighting for the wellbeing of his fellow New Haveners, and saw it as a struggle tied to the rights of workers and to the end of the military-industrial complex. At 16, he became the chairman of the Connecticut Young Communist League, publicly declaring a lifetime commitment to the cause that later made him a victim of invasive FBI surveillance. His years as a student at James Hillhouse High School were formative in and outside the classroom, as he spent organizing with a fire he still carries every time he speaks today.

[You can read the article in its entirety at www.newhavenarts.org and click on Arts Paper]