Civil rights activists marched from City Hall to Yale Police Department headquarters to protest the recent police killings of Daunte Wright and Adam Toledo in the Midwest. Dozens of marchers blocked traffic on Ashmun Street as they listened to community organizers speak out against police violence. 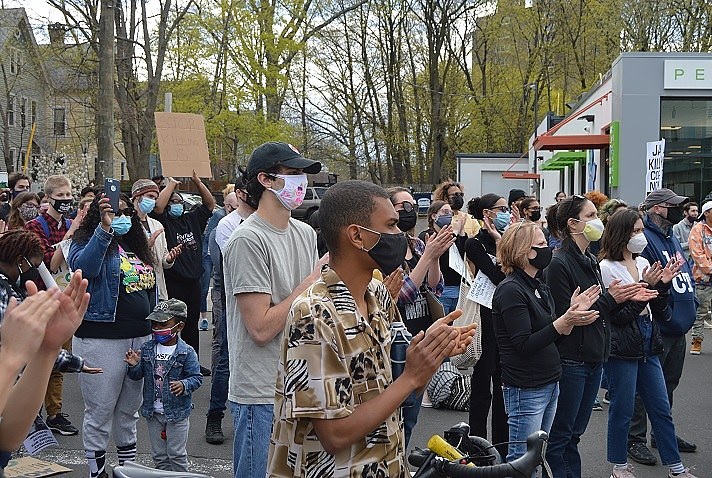 “Screw reform,” shouted Sunrise New Haven member Jaeana Bethea. “We need to put money into affordable health care and jobs. The cops are reactionary. We need to defund and abolish the police! We keep us safe! Mayor Elicker wants to complain about the dirt bikes in the neighborhood when there are much bigger problems!”

The demonstration was organized by the local Democratic Socialists of America chapter and Hamden Council member Justin Farmer in response to two police shootings that occurred earlier [in the] week and that resulted in the deaths of Wright and Toledo.

Wright was killed on April 11 in Brooklyn Center, Minn.–just miles away from where former police officer Derek Chauvin stood trial for the murder of George Floyd last spring. Wright died after police officer Kimberley Potter mistook her handgun for a taser and open fire.

Toledo, a 13-year-old boy, was killed on March 13 in Chicago when officer Eric Stillman allegedly believed Toledo was hiding a gun and shot at him during a foot chase. Video footage of the incident shows that the boy had his hands up at the time he was shot.

“I think it’s important for lawyers to step up and play their part in ending police brutality and civil rights violations,” said defense attorney Alex Taubes. “The protest rally today was not just about George Floyd, Daunte Wright, and Adam Toledo, but also Malik Jones, Jayson Negron, Mubarak Soulemane, and the victims of police brutality in Connecticut whose loved ones still seek justice.”

Read the entire article at www.newhavenindependent.org/index.php/archives/entry/protest3