Marlene Miller-Pratt (at podium in photo) is asking New Haveners for help in finding the families of victims of fatal gun violence. 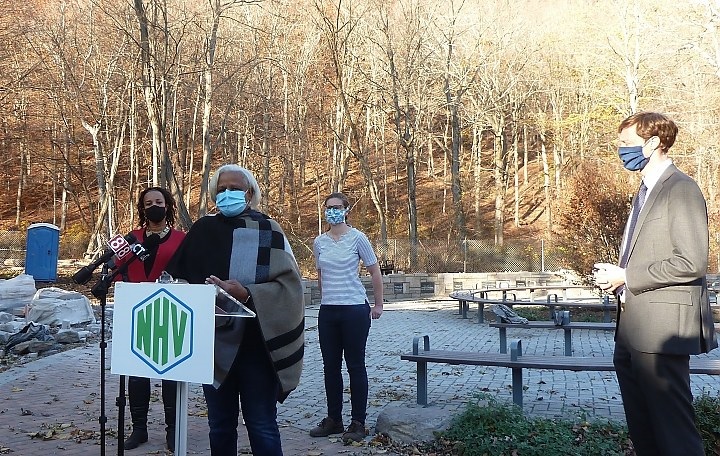 Standing in the shadow of West Rock on a sunny Tuesday afternoon, Miller-Pratt spoke at a press conference with Mayor Justin Elicker, announcing the near completion of the New Haven Botanical Garden of Healing she created and led to construction.

“Our goal is to get out the word to moms,” she said.

Along with a core group of fellow mothers of homicide victims, Miller-Pratt led the creation of the garden in West Hills. The garden honors homicide victims and provides a peaceful place for their loved ones to remember them…

Now construction is almost done: Urban Resources Initiative (URI) director Colleen Murphy-Dunning estimates that it will hopefully end before the start of 2021, although COVID may cause further delays.
Before the garden opens to the public, Miller-Pratt wants to extend an invitation for families affected by gun violence to come for a private viewing. They’ll be scheduled in advance for COVID safety, and last for 30 minutes. She’s especially focused on finding the families of victims whose names are on the Magnitude Walkway, which has a brick for each homicide victim from 1976-2000.

Over the last two weeks, Miller-Pratt has been going around the city with a poster, filled with the names of the victims. She has focused on Newhallville, while Celeste Robinson-Fulcher [whose daughter Ericka was killed in a nightclub shooting], and Pamela Jaynez (another member of the core group) have been going around Fair Haven.

When she stopped at corners, “I was ignored sometimes,” she said. But people spoke up “after they saw what that poster represented and saw how many names were on them.” One person, she said, turned straight around. He came back with four parents whose children were on that list. Another person saw the list and then lifted his arm to show his tattoo, which had his murdered cousin’s name. Yet others looked at the list and saw old friends.

Miller-Pratt gave out her phone number: (910) 975-2054. Any and every person who would like to schedule an early visit can contact her.

[Read the whole article at https://www.newhavenindependent.org/index.php/archives/entry/visit_homicide_memorial_soon]