Professor Ilan Pappé is an Israeli who taught at Haifa University. He left his teaching position in Israel after he was isolated by an ever more right-wing faculty and even started receiving death threats. Pappé and other “new historians” examined Israeli army records and disputed the conventional excuses for the expulsion of over 700,000 Palestinians. They revealed that the Palestinian narrative about what happened to them in 1947-1948 was essentially correct. 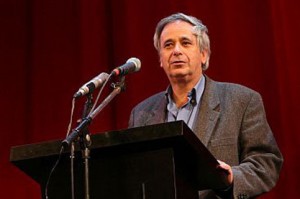 Pappé now teaches at the University of Exeter (UK) and is author of many authoritative texts including “The Ethnic Cleansing of Palestine” and “The Forgotten Palestinians: A History of Palestinians in Israel.”

He will be speaking at Yale on Tuesday, March 1, at 8 p.m. in Linsly-Chittenden Hall, Room 102, 63 High St., New Haven. He’s sponsored by Students for Justice in Palestine (Yale).

tagged with Ilan Pappé, The Ethnic Cleansing of Palestine, The Forgotten Palestinians