May Day 2015 Celebration Saturday, May 2 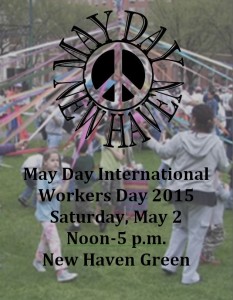 Our first meeting was well-attended and lively. We decided May Day will be Saturday May 2 from 12-5 p.m. on the New Haven Green with a rain date for the following day. We decided that the best part of last year’s event was the emphasis on kid-friendly entertainment. We also talked about how May Day was different because anyone is welcome to talk from the stage or set up any art project.

download it here in Word format, fill it out on your computer and email it to jeffreyspalter@netzero.net.

Please tell all your creative friends to contact me and participate in our festival. Please write me with ideas for entertainment and organizations or businesses that might help us out financially. We talked about how May Day this year will proclaim that while labor is under attack across this country we know that labor unions are a worker’s only friend and best hope.

If you are unable to attend the meeting, please email or call me because there are lots of ways to participate without attending meetings. We need help fundraising, ideas for performers, help contacting area activists and groups, help to publicize May Day and volunteers on the day to set up, run and clean up.

May Day mission statement: to organize a multi-cultural festival that honors and celebrates our labor history and the labor, peace, social service and social justice groups that today continue the struggle for peace and human rights.

The Young Men’s Institute Library is proud to host the Listen Here Short Story reading series, a night of classic short stories selected by the staff of the New Haven Review and read by cast members of the New Haven Theater Company. Reading starts at 7 p.m., with a talk back at 8 p.m. that explores the background, meaning, and dramatic interpretation of the stories. Also, freshly baked cookies and tea are available. $5 suggested admission, but no obligations! Next reading’s theme: “Love at Second Sight.” Our stories: “Before the War with the Eskimoes” by J.D. Salinger; “Miss Temptation” by Kurt Vonnegut. Join us Thursday, April 9, 7 p.m. at Young Men’s Institute Library, 847 Chapel St. Save the date May 13 for future readings, same place, same time, different stories, different actors reading. (Please note that the Institute Library is one flight up and, most unfortunately, not wheelchair accessible.) For more information, visit us at www.institutelibrary.org.

1500 cyclists will travel between West Rock and East Rock, with celebrations on both sides of the city. Along the way, they will eat tasty food, hear great music, take on environmental challenges and service projects, and explore the city’s parks. They will travel along the Farmington Canal Trail and official city bike lanes, pass through many of the city’s beautiful neighborhoods, and make stops in Edgewood and Beaver Pond Parks on their way between the Rocks. In 2015 there will be five rides: the 8-mile family-friendly ride; a 12 mile adult ride; the 20-mile ride; the 40-mile ride; and a metric century (60+ miles), all traveling through scenic and park filled routes in the New Haven region. Music at various stops and at the end at East Rock will be provided by CT Folk and with include performances by local musicians.

When you collect pledges, you choose to support any one of 20+ great organizations, all working to create a greener and healthier community. Check out all the 2015 Rock to Rock partners at www.rocktorock.org. For more information, call (203) 389-4333, ext. 1214.

This new film (3 hours 53 minutes) brings the experience of the Nov. 15, 2014 dialogue at Riverside Church in NYC between Cornel West, a revolutionary Christian, and Bob Avakian, a revolutionary communist, to life – all the fire and the passion to bring an end to all forms of oppression, the audacity, the science, the morality, the revolutionary substance. Watch the trailer for more information at www.revcom.us.

The premiere of this film was shown on March 28 in New York at the Schomburg Center for Research in Black Culture. On that day there were also premiere screenings in six other cities around the country (Los Angeles, Berkeley, Chicago, Cambridge, Atlanta, Houston). At 10 p.m., March 28, there was an online launch of the film on the website of Revolution Newspaper; www.revcom.us. With the use of present technologies this film will be viewed by people around the world which gets to the heart of what Bob Avakian and Cornel West pursued in the Dialogue: that things don’t have to be this way and there is a way to radically change the world for all humanity.

Organize house parties to view this film and in this local area contact: tpfr.newhaven@gmail.com.

The Energy & Technology Committee has made SB570 the committee’s bill to advance the proposal to cap fixed electric charges. 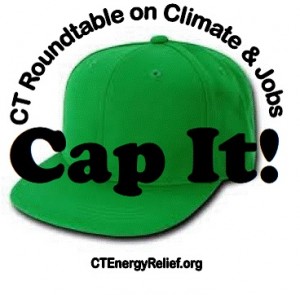 Several members of the Jewish Voice for Peace (JVP) New Haven chapter were among the 600 attendees at the bi-annual JVP national membership meeting in Baltimore, March 13-15. The weekend was filled with inspiring keynotes, fact-filled breakout sessions, hands-on workshops and planning exercises, and a somber and moving Jewish memorial service for those who lost their lives during the brutal assault on Gaza by the state of Israel this past summer.

A significant focus of the event was the Boycott, Divest and Sanctions (BDS) movement. BDS is a non-violent call by over 150 organizations in Palestinian civil society for three actions by Israel: ending its occupation and colonization of all Arab lands and dismantling the Wall; recognizing the fundamental rights of the Arab-Palestinian citizens of Israel to full equality; respecting, protecting and promoting the rights of Palestinian refugees to return to their homes and properties as stipulated in UN resolution 194. The call is conditional on these, and includes an end to BDS once they are implemented. BDS is not punitive but simply a means to achieve Freedom, Equality, and Justice for Palestinians long denied these fundamental human rights.

While the Israeli election occurred 2 days after the end of the JVP meeting, the racist rhetoric of Benjamin Netanyahu, his promise to maintain the occupation indefinitely, and the endorsement of his values by the Israeli electorate only serve to raise the importance of using BDS as a tool to achieve human rights for Palestinians. Find out more about the BDS movement at http://www.bdsmovement.net.
Rabbi Brant Rosen of JVP spoke from the heart: “I’d like to suggest that a deeper understanding of this value [love of the Jewish people] should not stop at love just for fellow Jews. After all, while the word Yisrael does refer to the Jewish people, it also literally means ‘one who wrestles with God.’ Seen thus, we might interpret it as love for all who struggle, to love all who fight as we have for freedom and justice and tolerance in the world, to stand in solidarity with those who struggle against tyranny, and are beaten, imprisoned, tortured or killed for doing so…these are the members of our tribe, perhaps our most sacred tribe.”

Angela Davis concluded her stirring plenary by remarking “We are compelled to speak back with the voices of our humble solidarity, and one of the most important of these voices is Jewish Voice for Peace. Carry on!”

Calls Needed for a Fair Budget in CT

The budget for the State of Connecticut is now under consideration. Governor Dannel P. Malloy’s proposal includes cuts to housing, nutrition, youth programs and more as a way to close the budget deficit. This is wrong and unnecessary.

The Better Choices Coalition, made up of unions, service providers and faith organizations, is calling on the legislature to raise revenues from the top incomes, and cancel the cuts. If the top 5% paid taxes at the same rate as the bottom 95% there would be no budget deficit.

Even though Gov. Malloy has said he would not increase taxes, the state legislature also has input into the budget and can make proposals.  A more fair tax system helps middle and low income families and their communities.

The Finance Committee of the State Legislature is in deliberations now. Please urge your legislators to amend the Governor’s proposal:

Just a few calls will get the attention of your State Rep and State Senator and let them know that their constituents want fair taxes, not cuts.