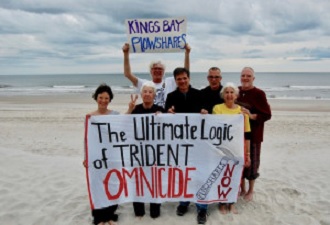 50 years to the day after the assassination of Dr. Martin Luther King Jr., on April 4, 2018, over two and a half years ago, the Kings Bay Plowshares 7 cut a lock and entered the base where nuclear-armed US submarines are home-ported, in a plowshares action which included pouring blood, posting an indictment which charged the US government for crimes against peace, posting crime scene tape and hanging banners, one of which said, “The Ultimate Logic of Trident is Omnicide,” and damaging Trident D5 monuments. Plowshares actions seek to enact the prophecy in the Biblical book of Isaiah that nations will beat swords into plowshares and study war no more. [see their website at https://kingsbayplowshares7.org]

[This entire article can be read at www.warresisters.org. In October, all were convicted on three felonies and one misdemeanor. Six have been sentenced. Mark Colville of the Amistad Catholic Worker House in New Haven is scheduled to be sentenced on Dec. 18. More information is at the Kings Bay Plowshares 7 website at https://kingsbayplowshares7.org]