On Saturday morning, city leaders and community members gathered at the Farmington Canal Trail to unveil a 7-foot bronze statue commemorating the life and legacy of Lanson. Oakland-based sculptor Dana King created the statue as part of an effort —coordinated by the New Haven City Plan Department and the Amistad Committee, a Connecticut based non-profit that educates the public about African American history —to celebrate oft-overlooked accomplishments by the city’s Black residents. […] 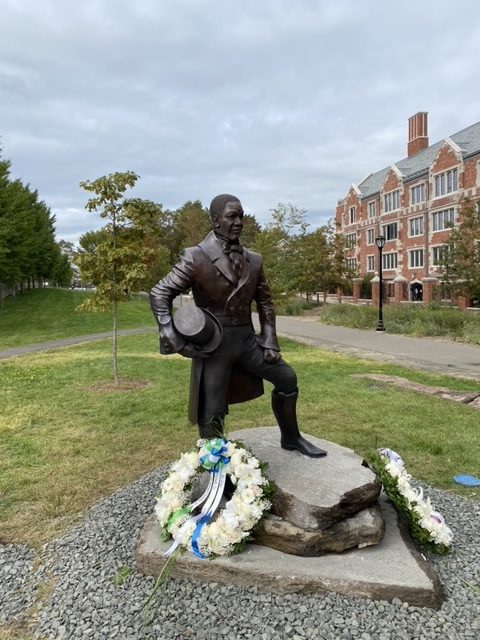 The Amistad Committee has been envisioning such a project for ten years. In 2010, the committee received a grant to expand the Connecticut Freedom Trail, which is a group of historic sites that offer a glimpse into the African-American experience in the state. […]

According to Connecticut History’s website, William Lanson was a formerly enslaved man who moved to New Haven with his family at the start of the 19th century and quickly became one of the city’s leading innovators. In 1810, he led a successful effort to expand the city’s Long Wharf by 1,350 feet –– a move that made it possible for larger ships to dock in New Haven and stimulated the city’s economy.

[Read the whole article at https://yaledailynews.com/blog/2020/09/28/city-unveils-statue-of-william-lanson-black-engineer-and-activist]