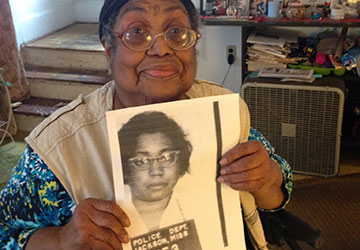 I was with Lula White at many gatherings in 35 or so years: peace actions to oppose the endless U.S. wars; Sunday night potluck discussions; Labor History Association meetings and events; union protests at Yale; even the occasional holiday party. With Mary Johnson, she often spoke of teaching, organizing and being jailed during the teachers’ strikes in the 1970s. Her story as a youthful freedom rider in the South unfolded more slowly.

When we decided to document the history of workers at New Haven’s Winchester Repeating Arms Company, Lula and her sister, Dorothy White Johnson, both long time members of the Labor History Association Executive Board, contacted former Winchester employees, conducted interviews and borrowed artifacts for the exhibit, “Our Community at Winchester: An Elm City Story.”

After the plant closed in 2006, we transferred the files, artifacts and photographs of the workers’ union, IAM Local 609, to the office I shared with the late Nicholas Aiello, then LHA president. The plan was to inventory and preserve them. As Nick witnessed 65 boxes slowly taking over our space, he became, not unreasonably, upset. We had a heated exchange. Lula arrived just as I left to take a breath. When I returned, Lula was smiling—and so was Nick, who congratulated us for having secured custody of these important historical records. Whatever she said or did, she had, typically, transformed the situation.

At Fairfield University, where the exhibit was displayed in 2017, I introduced Lula after a short history of the project, and began asking questions. The audience, mostly students, soon took over. Lula spoke quietly and without drama about her life as the daughter of a Winchester worker, growing up in the Newhallville section of New Haven, then becoming a teacher of history and union activist. She also shared the terrifying, brave experience of being jailed in Mississippi as a young Black woman, one of hundreds of freedom riders trying to integrate the buses in 1961. In an evaluation of the session, a student wrote that she was “cool.” She had shared her hope for a future based on engaged citizenship at a moment when it was desperately needed, just following the 2017 presidential inauguration.

During my only visit to the Intensive Care Unit where Lula was confined in June, not expected to survive, I whispered to her to “Keep fighting.” It wasn’t necessary. Fight she did. Over the summer, she slowly got better. She almost made it.

Despite Lula White’s inner calm, peace and strength, it cannot have been easy being fully “woke.” May she find the joy and rest she has earned.

Excerpt from the obituary notice of the New Haven Register, Sept. 16, 2019

Ms. White was frequently jailed as a freedom rider trying to desegregate public transportation. In addition, she was arrested for striking to raise salaries for teachers, and jeered for marching to protest injustice. She was recognized by the Quinnipiac University School of Law in 2016, was awarded the Thurgood Marshall Award for her activism and commu-nity service, and was awarded an Honorary Doctor of Humane Letters Degree from Albertus Magnus College in 2010. Lula fought the good fight.