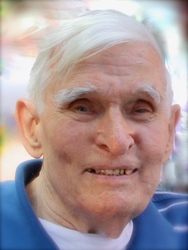 It is with great sadness that we inform our readers that Hu Woodard, well-known, dedicated and compassionate peace activist, has passed on. Many of you worked with Hu and his wife Edith throughout the years on a multitude of issues for peace and justice.

The memorial will be at 1 p.m. Saturday, March 31 at the Unitarian Society of New Haven, 700 Hartford Turnpike, Hamden. Our deepest condolences to his family. He will be greatly missed. The following excerpts are from the website www.iovanne.com/obituary/Hubert-Calvin-Henry-Woodard/Hamden-CT/1784606.

With the support of his church community, he became a conscientious objector in World War II and chose to serve as a noncombatant medic in the U.S. Army. He went behind enemy lines to rescue wounded soldiers and saved many lives, earning two Bronze Stars and ten other medals and citations, including the Combat Medic Badge. His unit liberated several prison camps, and the horror of the human suffering he witnessed there stayed with him; Hu spent the rest of his life working for peace. Most dear to his heart was working on issues of social justice and peace.

Hu was an active participant in the civil rights movement in the 1960s, peacefully protesting racism in its many forms. As a member of SANE-New Haven he was an outspoken opponent of nuclear testing and arsenals.

Hu vigorously opposed the Vietnam War and frequently marched for peace. In 1999 Mayor John DeStefano appointed Hu to the New Haven Peace Commission. Hu always put his voice, pen, and body into action, peacefully. The files containing his letters-to-the-editor and to state and national leaders were inches thick! Hu’s memorial website has photos and excerpts from his files: huwoodard.virtual-memorials.com.

In 1992 Hu helped organize a local Veterans for Peace group, which then formed the Hue-New Haven Sister City program. Their goals included people-to-people reconciliation and humanitarian aid. Hu once commented that his trip to Vietnam in 1997 was one of the most meaningful experiences of his life.
Hu was tired of seeing toys that glorify violence. To raise parents’ awareness in November 1997 he organized a Violence-free Toy Fair, just prior to the holiday buying season. The event was held at the CT Children’s Museum in New Haven, where he was treasurer.

Hu and Edith were longtime members of the Unitarian Society of New Haven. He served as both treasurer and president of the church and was co-founder of the Social Justice Committee, which is still very active today.