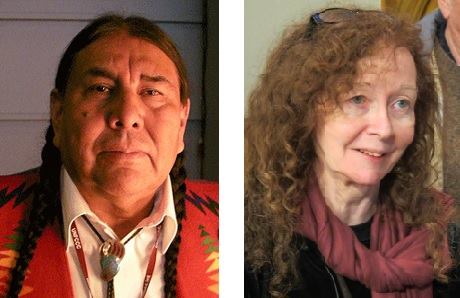 The 38th presentation of the Gandhi Peace Award by the national organization Promoting Enduring Peace, located in New Haven, honored two world renowned peace leaders, Kathy Kelly and Tom B.K. Goldtooth. The ceremony was held at the United Church on the Green in New Haven on October 30.

Kathy Kelly is nationally known for her outspoken activism protesting the use of drones by the U.S. military. She co-coordinates Voices for Creative Nonviolence, a national campaign to end U.S. military and economic warfare. She has led protests in Gaza and is an international leader against the war in Iraq. She has served several prison sentences for her non-violent, militant activism against nuclear weapons and war. On April 21st Kelly was released from federal prison after serving a three month sentence for non-violently protesting drone warfare at Whiteman AFB which operates weaponized drones in Afghanistan.

Tom B. K. Goldtooth is Dine’ and Mdewakanton Dakota. He is the first Native American recipient of the Gandhi Peace Award. He is the national director of the Indigenous Environmental Network (http://www.ienearth.org) at Bemidji, Minnesota, and has been a leader in Native social, economic, and environmental justice issues for over 35 years. He works with Indigenous Peoples and organizations around the world advocating for environmental and climate justice. He is co-producer of the award winning documentary film, “Drumbeat For Mother Earth,” which has received critical acclaim for its exposure of the effects of bio-accumulative chemicals on Indigenous communities. In 2010 he was honored by the Sierra Club and by the NAACP as a “Green Hero of Color.”