In November 2013, Promoting Enduring Peace presented TV personality and producer director Phil Donahue for its first Mark Shafer lecture. Mr Donahue presented his award-winning documentary about Tomas Young, “Body of War.” Young was the voice for all the thousands of injured and dead soldiers.

Young joined the army when he was 22, two days after the 9/11 attacks. He had been in Iraq less than a week when he and fellow soldiers came under sniper fire. He was paralyzed from the chest down after being hit by a bullet in his spine. 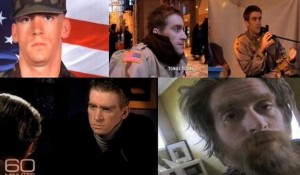 “Body of War” follows Young as a 25-year-old as he deals with his disability and finds his voice speaking out against the Iraq war and became an active member of Iraq Veterans Against the War.

On the tenth anniversary of the Iraq War, Truthdig published “The Last Letter” by Tomas Young directed towards George W. Bush and Dick Cheney.

“I write this letter, my last letter, to you, Mr. Bush and Mr. Cheney. I write not because I think you grasp the terrible human and moral consequences of your lies, manipulation and thirst for wealth and power. I write this letter because, before my own death, I want to make it clear that I, and hundreds of thousands of my fellow veterans, along with millions of my fellow citizens, along with hundreds of millions more in Iraq and the Middle East, know fully who you are and what you have done. You may evade justice but in our eyes you are each guilty of egregious war crimes, of plunder and, finally, of murder, including the murder of thousands of young Americans-my fellow veterans-whose future you stole…

“I hope that before your time on earth ends, as mine is now ending, you will find the strength of character to stand before the American public and the world, and in particular the Iraqi people, and beg for forgiveness.”

Promoting Enduring Peace joins the world in mourning a young man who should not have lost his life fighting in a war that should never have been fought.