by The CT Committee for the Prohibition of Nuclear Weapons

[Vice President Kamala Harris was met by demonstrators when she spoke in New London on May 18 at the graduation of the Coast Guard Academy. The following is from the email calling for people to join the demonstration.]

The Biden-Harris Administration proposed a new economic agenda to Build Back Better, investing in children and caregivers, affordable healthcare, housing, education, and clean energy technologies, while increasing jobs and improving our quality of life. However, billions of dollars are flowing into the modernization of nuclear weapons, including the Columbia-class submarine and weapons for Ukraine. While U.S. nuclear doctrine is “Mutually Assured Destruction,” the war in Ukraine fans nuclear tensions between the United States and Russia, who collectively possess more than 90% of the world’s nuclear weapons. For more info, email: nuclearbanct@gmail.com. 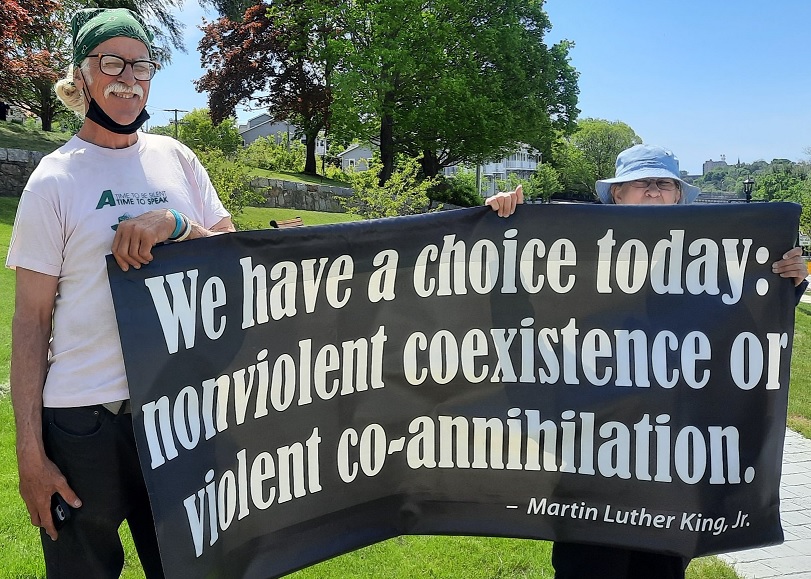 The Voluntown Peace Trust posted the above photo and following update on its Facebook page.

This morning, as Vice President Kamala Harris spoke at the Coast Guard Academy commencement ceremony, 18 demonstrators gathered nearby with signs to remind the visiting Vice President of an important message: that we cannot adequately fund the national infrastructure at home while also funding war-making abroad at the same time.

Thank you to everyone who came out to the demonstration, and thanks to Jonathan Daly-LaBelle for the photo.

Many CT organizations condemned the choice of John R. Bolton, Assistant to the President for National Security Affairs, as the featured Coast Guard Academy, commencement speaker on May 22. Bolton is notorious for demanding military solutions to international disputes.  He ruined the Korea talks by advising the president to take an all-or-noth-ing approach.  He stoked interference in Venezuelan affairs and helped incite the attempted coup. In 2015 he wrote the infamous New York Times op-ed entitled “To Stop Iran’s Bomb, Bomb Iran.”  His militarism would plunge this coun-try into useless and unjust wars and would endanger the lives of millions of people in the world including U.S. soldiers and Coast Guard officers.