Groups March and Rally for Palestine

On Sept. 19, the groups that organized the protest for Palestine last month were joined by students from Wesleyan’s Students for Justice in Palestine.

Again we stood on a corner in the center of Middletown with signs and banners, chanting led by activists with bull horns. We featured signs about the recent Israeli report whitewashing their killing of journalist Shireen Abu Akleh and again talked about the massacre of people in early August in Gaza. We also had signs calling for the shaming of both Connecticut Senators and our five members of Congress for their blind support of Israeli apartheid. Two signs had photos of two children who died because Israel would not let them leave Gaza for medical treatment. Judging by the number of honks from passersby our reception was even more friendly than in August. 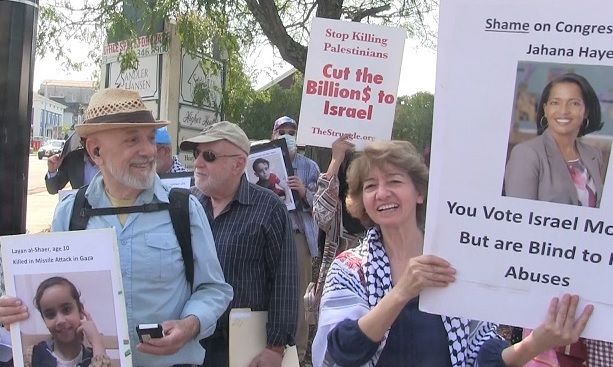 About 70 of us marched on the sidewalks down to the City Green, displaying the signs and banners and being urged on by chanting led by some very young members of the Omar Islamic Center.

On the Green we had 7 or 8 speakers including Marwan Hameed, a former Iraqi diplomat, and Laura Schliefer of Promoting Enduring Peace. We opened up two banners created ten years ago to commemorate the mass murder of at least 1300 Palestinians and Lebanese in the Sabra and Shatila camps in Lebanon in September 1982. They had been ordered into the camps by Israeli Defense Minister Ariel Sharon, supposedly to look for “terrorists.”

Ms. Schliefer was later interviewed on WPKN’s “Mic Check” for a half-hour. The interviewer was Mike Merli. We need more protests for Palestine like this all around Connecticut.

To see video and photos of the protest, go to thestrugglevideo.org. For more info on how to be involved, email mail@thestruggle.org or call 203-444-3578.