A Panther Passes On

The state tried to frame George Edwards and lock him up for life. His fellow revolutionaries tortured him and tried to kill him. They didn’t know whom they were messing with.

He survived — and kept at his Black Panther mission for another half century long after generations of fellow fighters left the theater. 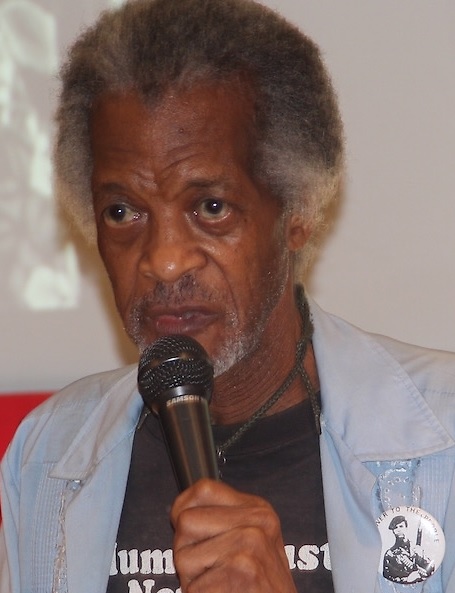 It was kidney cancer that finally claimed the life of George Edwards. He died late last Friday in Connecticut Hospice at the age of 85. Until his final months, he remained one of New Haven’s most visible and engaging voices, challenging power and supporting grassroots social justice crusades.

Perhaps the most spied-on and messed-with political activist in New Haven history, he combined theatrical training with an unshatterable suspicion of government power to speak out wherever people gathered: on city buses, at library gatherings, at outdoor protests. You may or may not have agreed with his assertions about imperial power, CIA connections to Yale, black helicopters or the moon landing. It was impossible not to listen. Or to appreciate the man speaking.

Edwards also possessed a gentleness and kindness that endeared him to people whether or not they shared his intense convictions.

“He lived a full life,” said his daughter, Elizabeth Dickerson, who had a Sunday pancake breakfast date with her dad at the Hamden IHOP in his later years. …

Edwards grew up in Goldsboro, N.C., where he engaged in his first protests with fellow high school students demanding that officials comply with the Supreme Court’s Brown v. Board desegregation ruling.

He worked on B52 bombers as an engineer for the U.S Air Force from 1955 through 1961, when he was ceremoniously removed for his role in antimilitarism protests. He later said a recording of a speech by Malcolm X had made him question his service to the United States: ​“I had a serious confrontation with history, politics, racism. I was becoming conscious of the world. This man had shown a light to the darkness of my brain.”

Yale School of Drama brought Edwards to New Haven, where he became a stalwart performer in the local Black Arts Movement. When the national Black Panthers opened a chapter here in 1968, Edwards was one of its first members. Local cops and the FBI under its deadly COINTEL-PRO spying-and-disruption initiative were already keeping tabs on him. He appeared on the FBI ​“Agitator Index’ and ​“Rabble Rouser Index.” His FBI file #124 – 310G would expand to 1,000 pages. It revealed how, if Edwards went to the store for a quart of milk, an agent made sure to follow.

[Article can be read in its entirety, with videos at www.newhavenindependent.org/article/panther_passes_on.