Prescription for Whose Peace Of Mind?

Seven activists identifying as “Progressives Against Medical Assisted Suicide” presented an alternative viewpoint at a screening of Prescription for Peace of Mind: An Option for the Terminally Ill at the New Haven Free Public Library on Wednesday, August 11.

With signs reading “Suicide is Not a Medical Treatment” and “Medical Assisted Suicide threatens the elderly, the poor, the disabled, you,” they passed out leaflets with nine reasons to oppose legislation allowing doctors to prescribe lethal drugs to patients they deem “terminally ill.” Five went inside to raise their objections directly to the two filmmakers. The screening was sparsely attended. 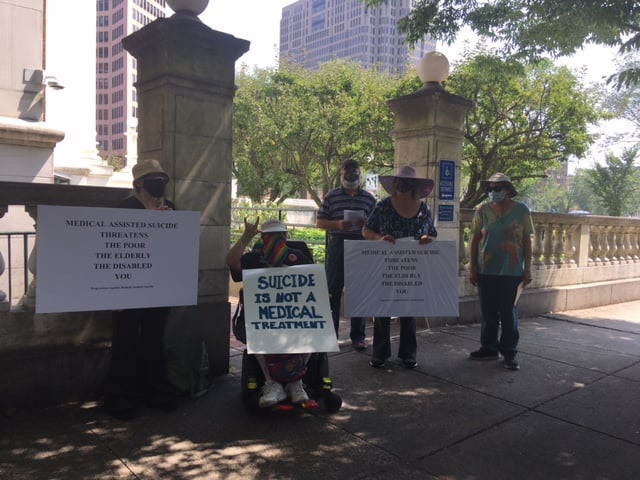 Presented as part of the New Haven Documentary Film Series, the film makes no pretense of objectivity. In addition to the three individuals whose very sad stories are told, family members who have spoken in support of Medical Assisted Suicide (MAS) are also interviewed at length. In a statement perhaps unintended to be so revealing, one family member, a nurse who also attended the screening, said that her reason for supporting the legislation is that the hospice care for her dying father was so inadequate and unhelpful.

The film also features Compassion and Choices Connecticut Field Director Tim Appleton and Rep. Jonathan Steinberg (D., Fairfield), long-time prime movers of MAS legislation in Connecticut. The voices of disability justice and other activists who testify before our state legislature annually and work continually to educate about the dangers of MAS are nowhere to be heard.

The five challenged this glaring and deliberate omission and discussed the dangers of MAS in detail, recounting painful personal stories of unyielding institutional pressure by the medical system to end life-sustaining treatment for their own loved ones. They cited cost-cutting imperatives by hospitals and insurance companies combined with prejudice against the disabled, the elderly, and the poor as twin threats that can only be further enabled by this legislation.

The most recent Assisted Suicide bill in Connecticut was voted out of the Public Health Committee for the first time in 2021, moving to the Judiciary Committee which chose not to bring it to a vote. Opponents fear another bill will be introduced next year.

SAVE THE DATE for an upcoming event Saturday, Oct. 2. “NOT DEAD YET” community sing-along and speak-out with Anita Cameron, Director of Minority Out-reach at Not Dead Yet (notdeadyet.org) and other invited speakers to be announced. NHFPL Community Program Room, 2-4 p.m., 133 Elm St. Fully accessible; masks required. Details  joan.cavanagh@gmail.com.