The Truth About Medical Assisted Suicide 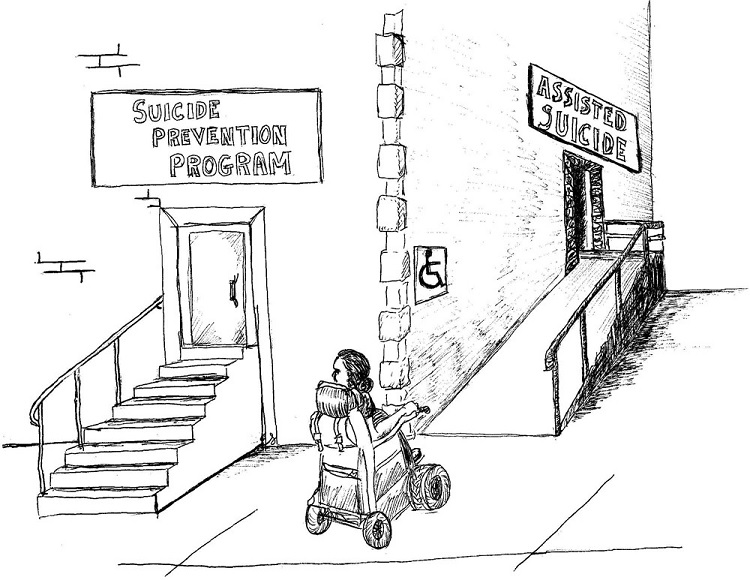 Cartoon created by Amy Hasbrouck of Not Dead Yet Canada

“What it takes to adhere to those guidelines is incredibly expensive and time-consuming and doesn’t happen. That’s the situation in the Netherlands and Belgium and Canada. All the heartfelt adherence to restrictions that are announced when you first get the public to vote in favor of this go up in smoke once the practice is validated. And it’s always with the talking points that it’s about relief of suffering, that the person, even though he cannot say this, would agree that he would be better off dead.

“Ethically, do I think people should have the right to control the timing of their death? I do. [But] I think it’s dangerous public policy. It’s a dangerous path to go down with the claim that it is all about respect for autonomy, when the real drivers are getting rid of a painful and expensive burden on society…

“There was a recent case in Canada: a guy with neuro-degenerative disorder who was cognitively intact. In order to go home from the hospital, he needed 24-hour care, and the government would not pay for 24-hour care. He recorded hospital staff offering him medical aid in dying as an alternative. You think that doesn’t create pressure on people who already feel like burdens? They need to be met with a resounding commitment to continued relationship. Not: ‘You’re right. I agree you’d be better off dead. Here’s a prescription.’ That pushes someone who is struggling right over the cliff.”

Please contact your State Representatives and Senators and tell them to vote “NO” on H.B. 6425, “An Act Concerning Aid in Dying for Terminally Ill People.”