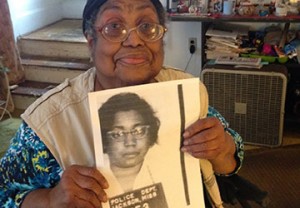 Lula White of New Haven holds the mug shot from her 1961 arrest.

Lula White of New Haven, a former Freedom Rider during the Civil Rights Movement [and a long-time member of PAR], received the Quinnipiac U. Black Law Students Association’s Thurgood Marshall Award on Feb. 25.

The Marshall Award is given in honor of the first African-American appointed to the U.S. Supreme Court. Marshall epitomized individual commitment to civil rights.

White was born in Eufaula, Alabama, to parents who were farm workers. When she was young, her family moved to Birmingham, Alabama, and then to New Haven, where she attended Hillhouse High School.

In 1954 she became a civil rights activist after reading an article about the Brown v. Board of Education decision, which ended legal segregation in public schools. To read more about Lula White’s receipt of the award, visit The New Haven Register or Quinnipiac U News and Events. or WTNH.com.