To date, Seymour’s post office remains inaccessible to elderly and persons with disabilities (PWDs) unable to climb its mountainous steps to the “public” lobby.

It has succeeded in evading ADA compliance and enforcement twice.  The U.S. Dept. of Justice claims lack of jurisdiction because this post office was built before ADA’s enactment in 1990.  Then the U.S. Access Board determined it also lacks jurisdiction because the steps were constructed in 1917 and have not been altered since the 1968 enactment of the U.S. ABA.   The postmaster refuses to re‑open the ramp at the rear where for years postal workers cheerfully provided services to anyone. 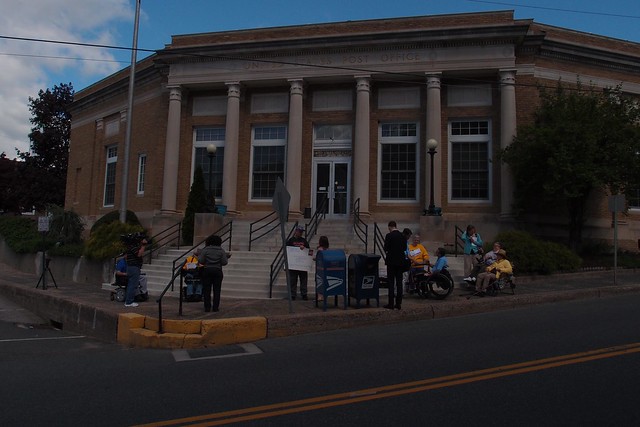 A rally in May of 2015 at the Post Office in Seymour, Conn., shows the stairs, insurmountable to many, in front of the federal building.

USPS has notified only me that, to obtain service, I must telephone the facility’s “dedicated” number when I arrive at the foot of the steps.  [In practice, (203) 888-3830 is the regular phone number and not dedicated to serve PWDs.]

USPS has ignored my repeated requests that Seymour’s post office should publicize its rules applicable only to PWDs and that it should be required at least to provide signage visible to all customers unable to climb to the public lobby.

Every year since 2012, Seymour’s town hall has assured me that by each year’s end or next spring work would begin to replace broken impassable sidewalks and to construct crosswalks and curbcuts.  These promises remain unfilled.  While new curbcuts have been constructed downtown, two are inaccessible because of steps in front of them, and another is inaccessible because the sidewalk leading to it is impassable.  Also, curbcuts have been provided to access two brickwalks—but curbcuts are absent at the other ends enabling continued travel.  Thus, dead-ends exist—25 years after ADA 1990.

Again, I invite PAR readers to consider signing the petition to ensure architectural access at Seymour’s post office, all other public accommodations, and all state and local government buildings.