United we are powerful! This May Day we are inviting all struggles to join us on the New Haven Green. It’s time to work together so that another world is possible:

Participate, so we can have a great May Day!!! 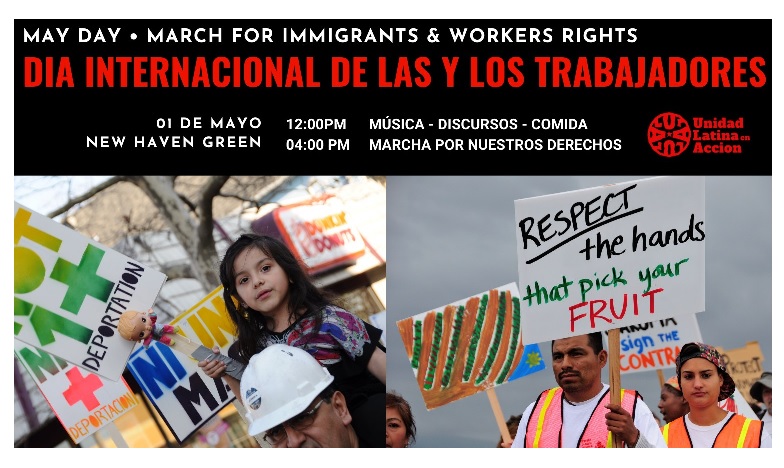 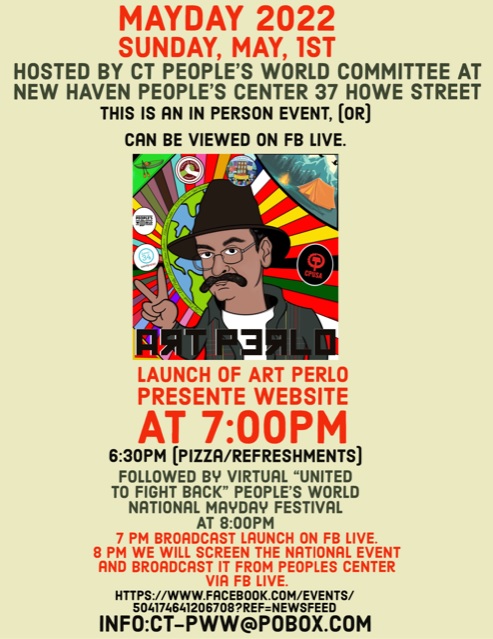 Connecticut should seek zero greenhouse gas emissions by 2050, says a study from Yale and Save the Sound in the New Haven Register. “Despite once being hailed as an early leader in combating climate change, Connecticut must aggressively boost its current pace of carbon reductions in order to keep up with the intensifying rate of warming in the region​..​.[The report] called on lawmakers to set a goal of reaching zero-carbon emissions in Connecticut by 2050 — hastening the state’s current mid-century target of reducing emissions by 80 percent. Even those more modest goals, however, remain out of reach at the state’s current rate of transitioning away from fossil fuels, officials have acknowledged.. ​’Connecticut is not doing its fair share​.'”

Connecticut jumps into the electric bus lane per NEWS 8 WTNH. “A pilot program of 10 EV buses is rolling right now in New Haven…Over the next 15 years, 500 buses will be phased in costing tens of millions of dollars. One electric bus costs $900,000. One diesel/hybrid costs $600,000. The federal government kicks in 80%. The state pays the other 20%. ‘Over the life cycle of having that bus, we save around $400,000 total in fuel savings…and maintenance costs are 50% lower…So it’s a net positive for taxpayers when we switch to electric buses.’ A diesel engine has lots of parts. The view of the electric battery system shows a simple row of tubes and a square battery.”

More than two years and three months after state trooper Brian North shot and killed New Haven teenager Mubarak Soulemane, the state has wrapped up its investigation of the case — and has arrested and charged the law enforcement officer with one count of first-degree manslaughter.

Inspector General Robert J. Devlin, Jr. made that announcement in a Wednesday morning press release. The press release states that North was released on a $50,000 bond and is expected to appear in Milford Superior Court on May 3.

The email announcement was also accompanied by a 133-page report that describes in detail the investigation that led to North’s arrest. The charges stem from the shooting death of Soulemane, a 19-year-old Fair Haven resident and child of Ghanian immigrants, on Jan. 15, 2020. That’s when state troopers engaged in a car chase with Soulemane up I‐95 while the New Havener was in the grip of an apparent schizophrenic episode.

“On January 15, 2020, at approximately 5:05 p.m. on Campbell Avenue, West Haven, Connecticut, after an extended pursuit on I‐95, Connecticut State Troopers Brian North, Joshua Jackson, and Ross Dalling successfully stopped a stolen 2012 Hyundai Sonata being operated by Mubarak Soulemane,” the introduction to the investigation reads. “The troopers’ police vehicles effectively blocked in the Hyundai. Shortly after the stop, Trooper North fired seven shots through the driver’s side window of the Hyun-dai. The bullets struck and killed Soulemane who was seated in the driver’s seat holding a knife.” 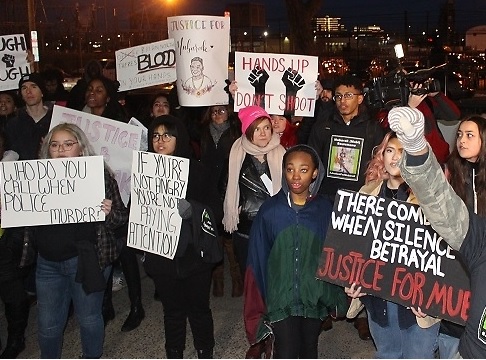 Ultimately, at the time that North fired his weapon, “neither he nor any other person was in imminent danger of serious injury or death from a knife attack at the hands of Soule-mane,” Devlin’s report continues. “Further, any belief that persons were in such danger was not reasonable. I therefore find that North’s use of deadly force was not justified under Connecticut law.”

[This article can be read in its entirety at www.newhavenindependent.org/article/brian_north_arrest]

Rally in Memory of Malik Jones, Murdered by East Haven Police on April 14, 1997 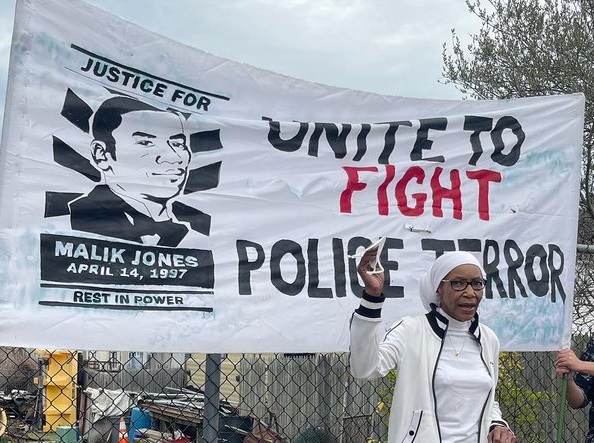 25 years after her son was brutally killed by police, Emma Jones continues to lead the fight against police terror. The PSL was honored to be part of the memorial event for Malik Jones.

Senate Bill 88, An Act Concerning Aid in Dying for Terminally Ill Patients, was defeated on April 11 by a 5-4 vote of Senators on the Judiciary Committee of the Connecticut State Legislature. Sen. Mae Flexer, a progressive Democrat from the 29th District, cast the tie-breaking fifth “No” vote. Flexer has consistently fought against cuts to much-needed social programs and has a stellar record as a champion of reproductive and women’s rights, the rights of immigrants, and the right to comprehensive health care coverage.

In a long conversation after the fact, the Senator explained that she sees her opposition as consistent with her commitment to protecting the vulnerable, heightened by her experience as the mother of a one-year-old daughter and the child of a disabled Vietnam veteran concerned about her father’s ongoing health care. She understands the threat that this legislation would be to those among us who are already marginalized by the medical system’s prejudices and cost-cutting mandates.

It isn’t often that we find someone in politics who is willing to vote their conscience and to face censure and criticism for doing so. Progressives Against Medical Assisted Suicide urges readers to write to thank Sen. Flexer for this courageous vote. You can do so on the message page of her website, http://www.senatedems.ct.gov/Flexer-contact, and/or at her government email address mae.flexer@cga.ct.gov, or by a phone call to the office of her legislative aide, Isabella Langlois, 860-240-8634.

Easter Event: More than 80 children and their families attended our fun, festive event in Kensington Playground in April. Kids participated in an egg hunt, egg dyeing, making and decorating bonnets, free books, and received an Easter basket full of chocolate. Renee’s Closet was also in the park with a pop-up shop of clean, ready-to-wear clothing and jewelry.

Park Proposal: All Community Management Teams in the City of New Haven have approved a resolution calling on the Parks Department to adopt a policy that every neighborhood should have a public playground. We would like to publicly thank them. 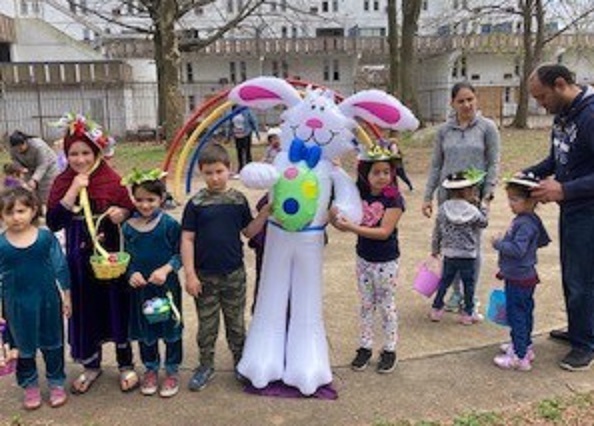 Tax-Exempt Status: We are applying for 501(c)(3) status, with the assistance of the CT Urban Legal Initiative. (Although we incorporated in 2020 as a nonprofit organization, we did not apply for tax-exempt status at that time.)

Legal Update: As of mid-April, we are still awaiting the judge’s ruling regarding our March 9 hearing, in which the City asks the court to dismiss our CEPA (CT Environmental Protection Act) claim.

Learn More. Get Involved. Donate: We remain hopeful that our efforts will result in the city reclaiming/saving this valuable and irreplaceable neighborhood greenspace. Please visit our website to get involved, sign our petition, and donate toward our lawsuit to save Kensington Playground at: KensingtonPlayground.org and/or gofundme.com/f/save-kensington-playground
[Read the whole article at www.newhavenindependent.org/article/kensington_park_lawsuit]

The Gather New Haven Farm-Based Wellness Program is an intensive lifestyle intervention 16-week summer program that supports participants in achieving their nutrition and physical activity-related goals by meeting on a local urban farm within New Haven once a week for two hours from 5:30 to 7:30 p.m. We engage in urban farming activities, we engage in group physical activities, we do a 10-minute mindful meditation and then move on to a nutrition discussion and a cooking demonstration which includes vegetables that participants are given to take home with them each week. On-site childcare is provided for participants with children. We also offer an additional Saturday session focused on physical activities from 9:30 to 11 a.m. The program is free, no cost to join.

The PAR Newsletter has always had as its mission the bringing together of activists by sharing reports of the events and ongoing work of groups to build a progressive community.

Sometimes we have received articles that are more like critiques of controversial issues that are important to particular groups but tended to emphasize differences within the progressive and broader community.

As we tend to focus on community unity and building a broad progressive constituency, we have rejected such articles and asked groups to send reports that show what groups are doing.

We recognize that within activist circles and the broader population there are many complex issues that can sometimes divide us and that require ongoing dialogue.

In this spirit, we would like to present a dialogue page in the PAR newsletter that will act as a place for groups to express differing views on controversial issues.

We would like this to be a page where groups focus specifically on their own positions on these issues, points of possible unity with others, and not as a place to criticize other groups or individuals with whom they disagree.

As an example, some activists see police violence as a reason to defund the police departments and to completely change the nature of “policing.” Others in our community feel the police are still necessary and look to other reforms. Discussions of such issues may help people find common ground and programmatic unity to further the causes dear to our hearts or at least to clarify differences.
Other examples, for instance, are the strong differing views on the war in Ukraine or the differing views on political violence in Syria.

We hope organizations will take up this offer and contact us with issues they would like to see on the dialogue page. The PAR committee looks forward to providing a forum for all to sort out controversial issues and build a stronger progressive family.

The construction of our current ecological restoration project at Haven and Exchange Street in Fair Haven is well underway and on schedule to be completed by the beginning of May.

One of the goals of this new green space is to filter and absorb polluted stormwater runoff from nearby streets before it reaches the Mill River. To restore the natural filtration process, we have removed the impervious asphalt and concrete surfaces in this dead-end roadway and have replaced them with porous sediment that has already seen a few rainfalls. Once construction is completed, we will open the site for volunteer planting events.

Students from the John S. Martinez School explored the Haven and Exchange Street site last month.
Students, families and the entire Fair Haven community will have the opportunity to help us plant native trees and shrubs in this space to absorb stormwater, restore and rehabilitate wildlife, and reconnect the community with the Mill River.