Resolution from the Conference on U.S. Military Bases Held Jan. 12-14

The Conference on U.S. Foreign Military Bases was held in Baltimore, Maryland, on January 12-14, organized by Coalition Against U.S. Foreign Military Bases—con-sisting of more than 250 peace, justice and environmental organ-izations from around the world. It heard from Okinawans and members of the Veterans For Peace from the U.S. who recently visited Okinawa to add their voices to the growing chorus opposed to the presence of U.S. military bases on the island. 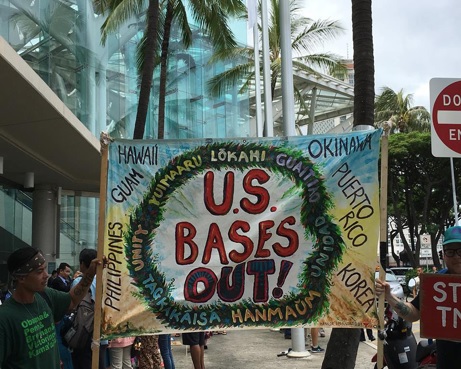 We are aware of the terrible role that U.S. bases on Okinawa have played in the destruction of the environment and of the many criminal acts of U.S. military personnel, including rape and murder against the people of Okinawa.

We are also aware of the central role that the U.S. bases on Okinawa played during the criminal war waged by the U.S. against the people of Vietnam and the present-day role they play in the aggressive military presence of the U.S. in the entire region.

On the basis of these facts, the Coalition Against U.S. For-eign Military Bases and all of the Conference participants unanimously demand that all charges against Hiroji Yama-shiro, and his co-defendants Hiroshi Inaba and Atsuhiro Soeda, be dropped and all attempts to silence the people of Okinawa in their just quest to rid their homeland of the many U.S. military bases be stopped.

The Coalition further pledges to support the case of Hiroji Yamashiro, Hiroshi Inaba, Atsuhiro Soeda, and to publicize their cases in the U.S. and to raise the demand that all U.S. military bases be removed from Okinawa.

Issued by the Coordinating Committee of the Coalition Against U.S. Foreign Military Bases, January 15, 2018.

Committee: Ajamu Baraka, Black Alliance for Peace; Ann Wright and Medea Benjamin, CODEPINK; Al Marder, U.S. Peace Council; Bruce Gagnon, Global Network Against Weapons and Nuclear Power In Space; Nancy Price, WILPF, and others. The very successful conference built unity in the US peace movement. It can be viewed in streaming video on the noforeignbases.org website.

LAST CALL! Use Your Creativity to Change the World (and this Newsletter)!

The Progressive Action Roundtable Planning Committee is happy to announce our first-ever contest for a bumpersticker and/or logo for our newsletter. What phrase or design would you want to see on the cars in front of you?

What logo for our newsletter would really speak to your sentiments of a better world? Depending on the number of entries, we estimate we will be able to announce a winner by June.

We are offering a $100 prize for the winning entry.

Please include your name, address, phone number and e-mail address with your design. You do not need to be a subscriber to participate. Thanks!

The Middle East Crisis Committee (MECC) is in its 35th year. MECC invites you to “Struggle, Resistance and Resili-ence in Solidarity with the Palestinian People,” a fund-raising party on Saturday, March 3 at 6 p.m. at the First Unitarian Universalist Society of New Haven, 608 Whitney Ave. Learn about Mazin Qumsiyeh’s efforts in building the Palestinian Natural History Museum in Bethlehem. There will be food, music, and video; auctions and door prizes are planned. $25 suggested donation.

For the past dozen years or so our biggest efforts have involved media. We have a weekly TV show on over 30 cable stations stretching from Maine to New York City. One focus of late on TheStruggle.org is Saudi Arabia (KSA) and its war against Yemen. Another focus is of efforts around the world to remember Syria. It’s called “2nd Day of Rage for Syria.” MECC stands for the withdrawal of U.S. troops from Syria and in support of Syrian civil society demands for ceasefire and honest elections.

The Connecticut Vipassana is pleased to host the 4th Annual public talk by Dr. Paul R. Fleischman, MD entitled “Meditating in Troubled Times,” on Monday, March 5, at 4 p.m. It is free and open to the public and takes place at Yale Osborne Memorial Lab, Room 202, 165 Prospect St. For details and to register go to: bit.ly/YaleMeditationLecture.

Dr. Fleischman trained at Yale University and practiced psychiatry for over thirty years. He was appointed a teacher of Vipassana by S.N. Goenka. He has recently lectured at numerous universities in the U.S. as well as in many coun-tries around the world. This year at Yale, he will discuss troubled times on the minds of our students/audience and how meditation can retain its relevance, or even increase its relevance, when the world is so full of turmoil.