Nearly 150 people — including the mother of murder victim Tyriek Keyes — marched through the streets of the city’s Newhallville section Saturday morning, calling for an end to urban gun violence and more jobs for urban youth. The anti-violence neighborhood march with the theme, Jobs For Youth, Jobs For All, in the Newhallville section of New Haven on September 23, 2017. Arnold Gold / Hearst Connecticut Media

The march was organized by New Elm City Dream/Young Communist League, Ice the Beef and New Haven Rising in the wake of a youth survey done over the summer in Newhallville, said one of the organizers, Jahmal Henderson.

The march lost its police escort — and some of the reporters and photographers covering it — mid-way through when shots rang out and the shooting of a woman and two police officers was reported on Elm Street.

When The Power Goes Out

The visit this week of former Israeli U.N. Ambassador Ron Prosor to the Slifka Center at Yale [was] a good time to reflect on Israel’s management of its relationship with Gaza since it “ended its occupation” in 2005, under the steward-ship of Ambassador Prosor.

While there are no longer Israeli settlements in Gaza, Israel controls all land entry points to Gaza, with the exception of the Rafah crossing to Egypt. It also enforces a blockade of the Mediterranean coast of Gaza, with a 6-nautical mile buffer zone where Gazan fishermen may operate. The blockade prevents any departures or arrivals at Gazan ports. The only airport in Gaza closed in 2001 after being severely damaged by the Israel Defense Forces. This gives Israel nearly complete control of whom and what enters and exits Gaza.

Read the whole article in the Register Citizen here: http://www.registercitizen.com/opinion/article/Forum-When-the-power-goes-out-12215751.php

Shelly Altman is a New Haven resident and chairperson of the Jewish Voice for Peace New Haven.

At a meeting in early August President Trump threatened North Korea with “fire and fury like the world has never seen.” He was worse at the U.N. this week. There talking about the U.S. he said, “if it is forced to defend itself or its allies, we will have no choice but to totally destroy North Korea.” Totally destroy? A country has a right to defend itself from an actual attack, but not to wipe out the entire nation of the offending government. That’s the immense crime of genocide. Trump threatened genocide and the corporate media just blandly reported it. The politicians were deafeningly silent. 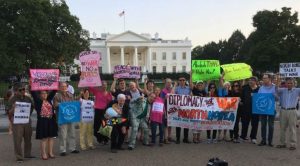 There seems to be no limit to what crimes you can threaten in this brutal world. Talking about North Korean Supreme Leader Kim this month, John McCain said “If he acts in an aggressive fashion, the price will be extinction.”

For its part (if corporate media translators are to be believed) Kim’s government uses similar language to make monstrous threats. In April his Vice Minister for Foreign Affairs Han threatened a “pre-emptive” nuclear attack if North Korea felt it was going to be attacked. In July a spokesperson said if there was the “slightest hint” that the U.S. was trying to remove Kim there would be a “merciless blow in the heart of the U.S.” with our “powerful nuclear hammer.”

The difference, of course, is that while North Korea is developing a nuclear force, the U.S. could actually annihilate North Korea right now.

The U.S. public is quiet, either buying Trump’s line or acting as if both side were just blowhards who would never dare to go through with their warnings. Yet even if Trump and Kim don’t really want nuclear war things have a habit of getting out of hand. People get angry, accidents happen, mistakes are made and … The point is not to get hysterical and start a nuclear war.

Read the whole article at peacenews.org.

Greetings! JustHouHS is pleased to announce that they are ready to start recruiting participants for the Justice, Housing & Health Study (JustHouHS) in New Haven.

As you may know, this study will explore the linkages between criminal justice experiences, access to stable housing, and health, with a particular focus on HIV risk.

They are looking to recruit 400 low-income residents of New Haven to take a survey in our office every six months for two years. Participants will be compensated with a $50 gift card for each visit. Community members that have been released from prison in the past year are especially encouraged to call.

Thank you for your interest in our research and help with recruitment! Alana Rosenberg and Penelope Schlesinger on behalf of the JustHouHS research team

CT Fund for the Environment/Save the Sound Job Openings

CFE and Save the Sound are hiring for three job openings on their Development and Green Projects teams.

Chief Development Officer A senior fundraising professional to continue CFE/Save the Sound’s proven record in major gift development and provide strong leadership to our solid philanthropic program. The Chief Development Officer will manage a motivated team of seven, already successful with foundation and government grants, individual donor solicitation and stewardship, and our newly expanded membership and events programs, and will lead our major gifts individual giving program. Additional responsibilities include partnering with the Board of Directors’ Development Committee and Communications staff on marketing and communications efforts.

These positions are based in our New Haven office, 900 Chapel St., Upper Mezzanine, New Haven. For more information, phone (203) 787-0646 or go to our website www.ctenvironment.org/employment.

by Paula Panzarella, Fight the Hike

Solarize New Haven will have a press conference on Wednesday, Oct. 18 from 7-9 p.m. at the Hall of Records, G2 Hearing Room, 200 Orange St. The press conference will be followed by an information session. People can have their questions answered about solar panels, installation and energy financing. This is a great opportunity for New Haven homeowners to explore the possibility of getting solar panels. There are many financing programs that make solar panels affordable. This solar installation is available also to multi-family homes, provided that one of the apartments is owner-occupied. RGS is the company that will be installing solar panels through Solarize New Haven.

On Sept. 5, the New Haven Alders passed a resolution to encourage the State of Connecticut to push forward on promoting shared solar. We hope that as clean energy advocates in other CT cities and towns have their boards of alders or town councils pass similar resolutions, Connecticut legislators will move ahead in allowing the development of many shared solar projects.

At the hearings last month about the draft 2017 Comprehensive Energy Strategy of the Department of Energy and Environmental Protection, many people spoke out about the shortcomings of the proposed energy policy and specified the need for expanded shared solar projects. The timing of the hearings and the New Haven resolution coincided well!

In the history of popular struggles, a most important chapter will be the role of women who with courage and unflagging determination work for justice and human rights in their communities. Women helped to bring clean water to Cheyenne River Reservation in South Dakota, and women were at the forefront of the encampment at Standing Rock, by the contagion of their spirit helping to build an international community of resistance. 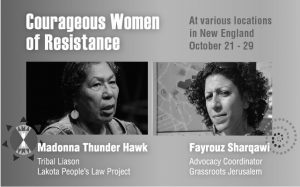 Likewise in Israel and Palestine, in the refugee camps in Jordan, Lebanon, Gaza and the West Bank, in organizations such as “Bedouin Women for Themselves” and “Grassroots Jerusalem,” women are helping to build a non-violent resist-ance movement. By refusing to be silenced or compromised by the militarism of settler colonialism, these women are speaking truth to power and in doing so, they are helping to bring enlightenment and engagement in the struggle to build a better and more peaceful future for their children.

The Courageous Women speakers: Madonna Thunder Hawk, a member of the Oohenumpa band of the Cheyenne River Sioux Tribe, has a long history of grassroots activism prior to her formative work for Lakota People’s Law Project (LPLP) as a Tribal Liaison. She is co-founder of Women of All Red Nations (WARN), as well as the Black Hills Alli-ance—which prevented corporate uranium mining in the Black Hills and proved the high level of radiation in Pine Ridge reservation’s water supply.

Fayrouz Sharqawi works as the Advocacy Coordinator at Grassroots Jerusalem, a platform for Palestinian community-based mobilization, leadership and advocacy in Occupied Jerusalem. They believe that the challenges and responses of Palestinian communities must be articulated and led by them.

Please join us for this timely community conversation and as we celebrate Hispanic Heritage Month! The presentation and discussion will be held on Monday, Oct. 16, from 6 – 8 p.m. at the New Haven Free Public Library, 133 Elm Street.

Marcel Lueiro Reyes is a popular educator and socially-conscious media producer who has worked at the Martin Luther King Jr. Memorial Center in Havana for the past twelve years. Marcel is a specialist in the fields of popular communication, culture and the arts in Cuba. Many of his poetry collections have been published and some have even won national literary prizes. Marcel has traveled to many countries, as both a popular educator and a journalist. During this tour Marcel will share the reality of the Cuban people, focusing on community-based experiences in the struggle to create a more inclusive and democratic socialism. Marcel is eager to discuss the perception of US policies on the island as well as the influence of people from the US on beloved aspects of Cuban life, such as baseball, music and film. Marcel’s blog: lueiropoeticas.blogspot.com.

This event is in Spanish with English translation. Cosponsored by Witness for Peace witnessforpeace.org. For more info email sgodfrey@nhfpl.org or call (203) 946-7450.

The life and work of Frederick Douglass, the famous African-American abolitionisst who helped rally black solders to fight for the Union during the Civil War, was honored Saturday in recognition of how his work still resonates.

The event, ‘New Haven’s Response to Charlottesville,’ was held in Criscuolo Park, where Douglass once spoke to the 29th Colored Regiment, an all-black volunteer regiment mustered in 1864 out of Fair Haven, according to connecticut-history.org… 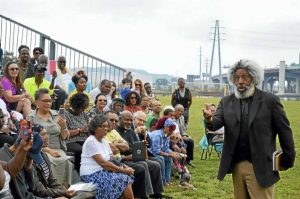 Nathan Richardson, who portayed Douglass at the event, said he feels humbled by the opportunity to represent the historical figure. Photo: Clare Dignan

Nathan Richardson, who portayed Douglass at the event, said he feels humbled by the opportunity to represent the historical figure. He is a poet, author and spoken word per-former on “The Frederick Douglass Speaking Tour.” His performance was a creative portrayal taken from speeches and biographical material of Douglass’s life.

For the complete article go to nhregister.org.