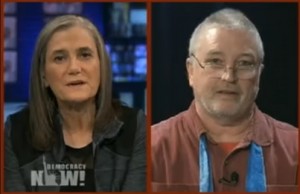 A longtime peace activist was sentenced today to one year conditional discharge for demonstrating outside the gates of New York’s Hancock Field Air National Guard Base, which is used to remotely pilot U.S. drone attacks. Mark Colville faced up to two years in jail stemming from his arrest last December. More than 100 people have been arrested over the past five years as part of nonviolent campaign organized by the Upstate Drone Coalition. Hours before he learns his fate, Colville joins us to discuss his activism and why he opposes the U.S. drone war.

via Peace Activist Sentenced for Protesting at Drone Base Near Syracuse, NY | Democracy Now!.

by Friends of the Amistad Catholic Worker

On Sept. 18, 2014, Mark Colville, of Amistad Catholic Worker in New Haven, was convicted on five criminal charges for walking peacefully to the front gate of the 174th Attack Wing at Hancock Airfield in Syracuse, N.Y., along with Yale Divinity School students Creighton Chandler and Greg Williams, to deliver a People’s Order of Protection for the Children of Afghanistan.

Mark and his family and community are preparing for his sentencing on Dec. 3 in Syracuse, in a court that has gone to extreme lengths to justify the U.S. government’s extrajudicial killing and crimes against humanity perpetrated through weaponized drone strikes.

Before the trial, Judge Robert Jokl threatened to give Mark the maximum penalty allowable, which could amount to more than two years in prison.

Note: As you who have supported us in the past know, this situation has placed a stress on the life of the Amistad Catholic Worker, and with Mark away it will continue to increase. We need people to think of ways to help us, both financially and by lending a hand to our work of hospitality. Please put some prayerful consideration into this, and join us if you can! For more information, call Frances Goekler-Morneau: (203) 676-2066; (203) 562-6165.

This article from Friends of the Amistad Catholic Worker first appeared in PAR-NewHaven.org.